Digital Object Identifiers and their use at American U.: DOIs

This guide describes the role of Digital Object Identifiers (DOIs) in the scholarly communication landscape and how DOIs are assigned by AU Library.

What is a DOI and how does it work?

DOI stands for Digital Object Identifier, a system to unambiguously identify - and thereby, be able to reliably cite - creative and research outputs. It was developed in the late 1990s, and implemented in the early 2000s, primarily and originally for articles in scholarly journals. For some examples of the use of DOIs in citing sources, see How to Use the New DOI Format in APA Style; and for more details on the DOI infrastructure, the Key Facts on the Digital Object Identifier System.) Since those early years, DOIs have also become adopted for datasets and other research outputs.

DOIs are (intended to be) globally unique, persistent identifiers:

The library can also "reserve" DOIs for articles, reports, datasets, etc., before the DOI is made live and pointed to that (or any other, related) digital object with a URL. For example, we have created a DOI for a report to include in the suggested citation that that report contains. Please send any inquiries about this service to DataCite@american.edu.

The role of DOIs in the scholarly ecosystem

In the "scholarly ecosystem" depicted here: 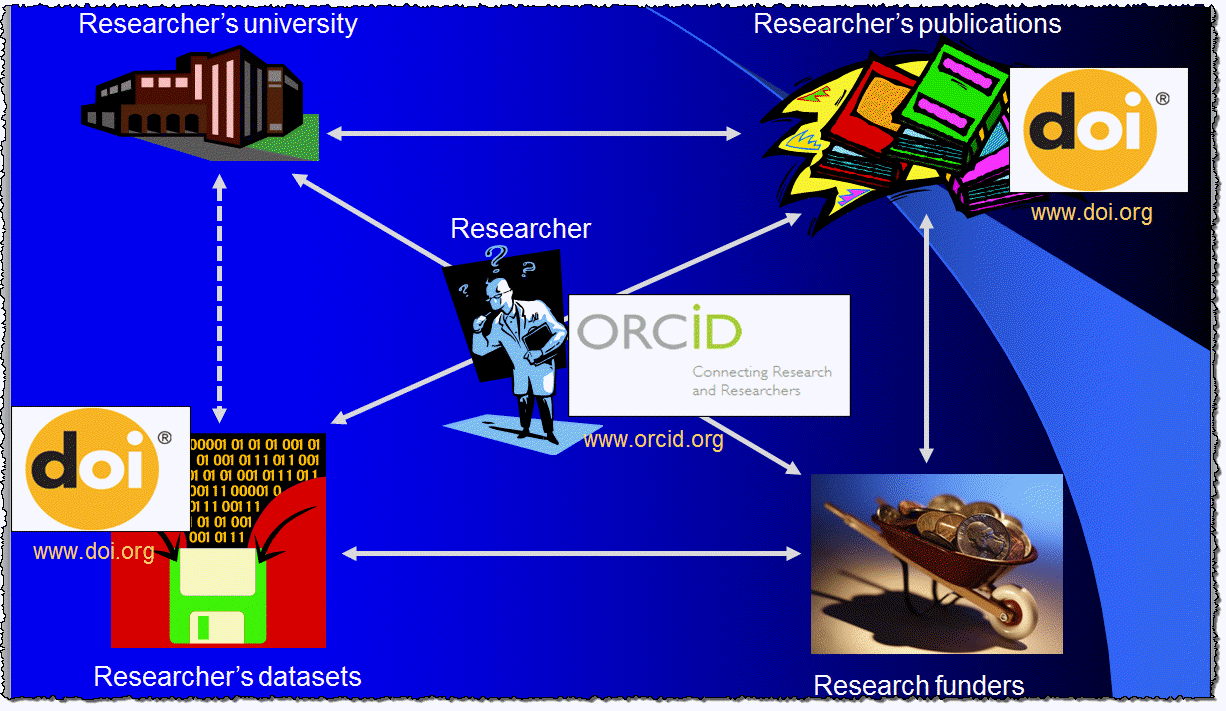 several questions may be asked by the parties involved, and from the outside:

​The combination of Digital Object Identifiers (DOIs) for datasets and publications, and ORCID iDs for researchers and research contributors can help establish these linkages easily and unambiguously.  (Persistent Identifiers for organizations and funding sources are in development, but beyond the scope of this guide.)

Source of graphic: presentation Linking research data and publications: a survey of the landscape in the social sciences at the Second Workshop on Linking and Contextualizing Publications and Datasets.