News Literacy: Is it "Fake News"? 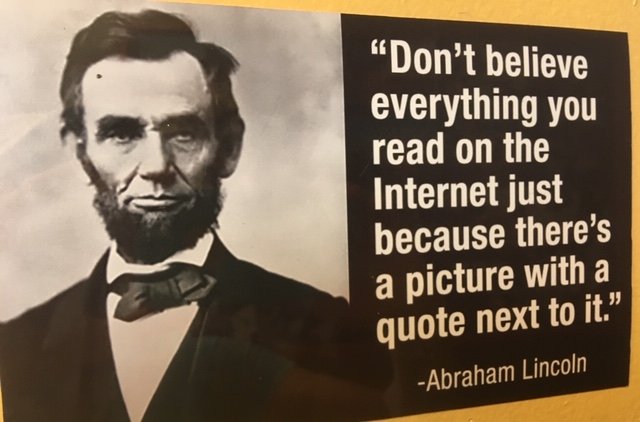 What is a fact?  Here is what Oxford Languages says:

fact
Noun.  Pronounced /fakt/  Plural: facts
1. a thing that is known or proved to be true
2. the truth about events as opposed to interpretation

Fact Check a nonpartisan, nonprofit project of the Annenberg Public Policy Center of the University of Pennsylvania monitors the factual accuracy of what is said by U.S. political players, including politicians, TV ads, debates, interviews and news releases.

Open Secrets a nonpartisan, independent and nonprofit website run by the Center for Responsive Politics tracks how much and where candidates get their money.

Politifact a Pulitzer Prize winning website rates the accuracy of claims by elected officials. Run by editors and reporters from the independent newspaper Tampa Bay Times, Politicfact features the Truth-O-Meter that rates statements as “True,” “Mostly True,” “Half True,” “False,” and “Pants on Fire.”

Snopes an independent, nonpartisan website run by professional researcher and writer David Mikkelson researches urban legends and other rumors. It is often the first to set the facts straight on wild fake news claims.

Washington Post Fact Checker Although the Washington Post has a left-center bias, its checks are excellent and sourced. The bias shows up because they may fact check conservative claims more than liberal ones.

AllSides. While not a fact-checking site, AllSides curates stories from right, center and left-leaning media so that readers can easily compare how bias influences reporting on each topic.

Quote Investigator Who really said it?

After reviewing NewsBusters, several librarians independently concluded that systematic fact-checking was not the primary purpose of the website.

Respected professional journalists and major news outlets are not immune to bias or deadline pressures. An article may tell just part of a larger story. Taken out of context it could be misleading. The media reports breaking stories before full facts are known. Always search for updates.

News sources include opinion pieces, commentary, editorials and advertisements that may look like news articles. Be aware of whether the information it is fact or opinion. Traditional news sources are to various degrees either right or left leaning. While some admit their bias, others do not.

Some Rules of thumb:

On every website, click on the "About" link usually found in small print at the bottom of the landing page. Investigate authors to consider their credentials.

Pay attention  to urls: Look carefully at the domain name. For instance, what looks like an .edu domain, followed by .co or “lo” is likely a fake or deceptive site.  If you are you seeing a slightly variant version of a well-known URL, do a little investigating.

Suspect the sensational: Exaggerated and provocative headlines with excessive use of capital letters or emotional language are serious red flags.

Go back to the source: When an article mentions a study, if you can, go directly to the source and check its bona fides as well.

Go back to the story again (and again): When was the story written? What is its context? Breaking news will continue to break. Early reports are built from limited information so you’ll want to watch a story grow into a fuller picture.

Think outside the reliability box: The old checklist-type tools we used to evaluate websites do not necessarily work. ACRL’s Framework reminds us that the notion of reliability can be fluid. Experts know how to seek authoritative voices but also recognize that unlikely voices can be authoritative, depending on need.  On Twitter’s 10th birthday this year, Poynter, the respected journalism portal, listed "10 Twitter How Tos" - a guide for using Twitter for journalism from its own archive. Students can benefit from these tips too.

Triangulate: Try to verify or corroborate the information in multiple sources, including traditional media and library databases. You can begin to rule out the hoaxes by checking out sites like the nonprofit, nonpartisan FactCheck.org, or popular sites like Snopes.

What exactly are you reading?: Even when you find yourself in a traditional news site, identify what type of writing you are reading. Is it news reporting, or a feature story, or an editorial, or work by a guest blogger, or a review, or an op-ed or a disguised ad, or a comment?

Check your own search attitude and biases: Is your search language biased in any way?  Are you paying more attention to the information that confirms your own beliefs and ignoring evidence that does not?

Be thorough: Do due diligence in seeking and validating the best possible sources across media platforms

Stop before you forward (or use): When you see a widely shared or forwarded link, be suspicious of a hoax or a fake story.  Can you verify the information outside of the social media platform on which you discovered it?

Be suspicious of pictures!: Not all photographs tell truth or unfiltered truth. Images are normally edited, but sometimes they are digitally manipulated. Some are born digital. A Google reverse image search can help discover the source of an image and its possible variations. (adapted from SLJ's blog.) Take a look at this article: "The Hidden Signs That Can Reveal a Fake Photo"

Fact or Fiction: What Will It Take To Combat Misinformation and Disinformation in the Digital Age? (newamerica.org)

Videos created by Mike Caufield to review his "Four Moves"

“Fake News. It’s Complicated.” First Draft, which is currently supported by the Knight Foundation, Google News Initiative, Facebook Journalism Project, and others, “undertakes practical journalism projects in the field, to research effective methods for tackling information disorder online” and has other interesting projects and articles on evaluating news sources

"The Hidden Signs That Can Reveal a Fake Photo"

Web Literacy for Student Fact Checkers (e-book) by Mike Caufield outlines his "Four Moves"
How could deepfakes impact the 2020 U.S. elections?  Nieman Foundation discusses the ease with which a person can alter videos allowing users to make compelling video and audio clips of individuals doing and saying things they never did or said.
We Tracked Down a Fake News-creator (2016) NPR report on tracking down and interviewing a fake news operation.
GoodReads.com bibliography lists 90+ books on "Facts, Fake News, & Critical Literacy" with links to reviews.