Embarking on a research project that even touches lightly on the concept of indigeneity can feel like watching branching fireworks—each tendril splits into multiple, which split into multiple, which split into multiple. As Lakota writer Hilary N. Weaver puts it, “are we talking about race, ethnicity, cultural identity, tribal identity, acculturation, enculturation, bicultural identity, multicultural identity” or something else altogether? The resources in this subtopic are intended to serve as introductory portals, to convey a sense of the global indigenous context and the multiple understandings of what it means to be “indigenous,” “Native,” “First Nations,” or “Aboriginal.” We’ve also selected examples of indigenous studies from Australia, New Zealand, Latin America, Hawaii, Canada, and diaspora communities that have emigrated or relocated to survive.

Each region will have experienced particular ramifications of specific settler-colonial contact, depending on which country’s colonizers reached them first and what degree of confrontation ensued. Nomenclature and terminology may vary widely from one community to another even in similar geographic regions. For an accessible introduction to the North American Native context, consider starting with scholar Roxanne Dunbar-Ortiz and Dina Gilio-Whitaker’s All The Real Indians Died Off: and 20 Other Myths About Native Americans. This distilled collection from the author of An Indigenous People’s History of the United States will orient you in historic and contemporary issues from language to misapprehensions about Native victimhood. Standing Rock Sioux writer and academic Philip Deloria’s Indians in Unexpected Places will help identify tropes and expectations you may not even know you’re carrying, to prepare you for media studies or a cultural criticism approach.

This graphic from Circe Sturm's Becoming Indian illustrates the complex nature of belonging within the Cherokee nation, for example: 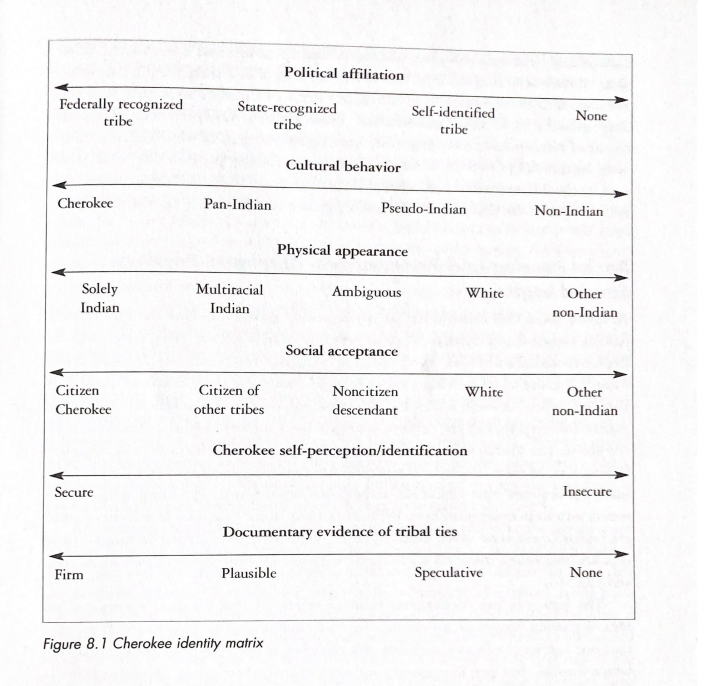 Dunbar-Ortiz, Roxanne, and Dina Gilio-Whitaker. “All the Real Indians Died Off”: and 20 Other Myths About Native Americans. Beacon Press, 2016.