From American University’s Center for Diversity and Inclusion, adopted from the Association of American Colleges and Universities (AAC&U):

In other words, to be diverse is to be the opposite of segregated, to be in a group that contains differences rather than a group characterized by similarity or conformity. It has also become a buzzword for corporations and institutions to use to describe their intentions to be more inclusive, though that doesn’t always translate to improved experience for people who are marginalized by resistance to those differences.

As the academic conversation has expanded from “diversity” to “diversity, equity, and inclusion,” it’s become clear there’s more to improving access and opportunity than just inviting various types of people to the table. Inclusion has the added implication of ensuring that access benefits those being included, not just the majority being “diversified,” e.g. difference being added or identified. Whether an Academic trend or an institutional investment in social justice, “EDI” commitments are becoming a part of the job market fabric and, we hope, a crucial element in how education, resources, and opportunities are developed and offered to a wider population. From educational best practices (Bilias-Lolis) to critical library studies (Stripling), from expansive research (Ahmed) to international implementation (Özturgut), these resources are an EDI starting point.

Our shifting understanding of EDI can be illustrated by this update of an old cartoon illustrating Equality and Equity. Without the boxes they stand on, the tall, medium and short people trying to see the baseball game can’t see over the fence. But as our understanding of systems and barriers has grown, we’ve started to think of equity in different ways--not just offering specialized assistance, but looking for ways to fix the obstacles themselves. 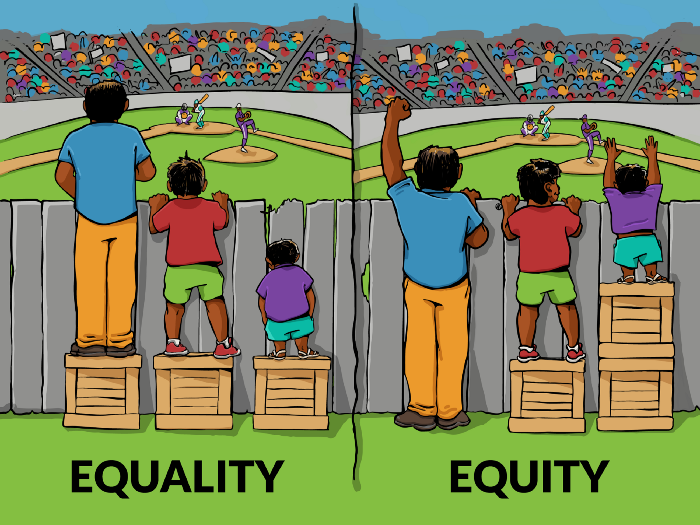 This updated cartoon by Tony Ruth seems to acknowledge the flaws in the “equity” approach, which still requires one person to stand on a higher ladder, and therefore climb more steps, than the other, and move us toward justice, which addresses the systemic cause of the inequality by fixing the leaning tree.

Image description: All four images feature art inspired by Shel Silverstein’s The Giving Tree--a light green background with a big darker green apple tree in the center of the frame, leaning to the left. Two small people stand at the base of the tree in each image. In the first image, “Inequality: Unequal access to opportunities,” an apple drops to the person on the left while the person on the right holds out their arms and looks questioningly. In the second image, “Equality? Evenly distributed tools and assistance,” both small people stand on ladders, but because the tree leans left, the person on the right still doesn’t have access to the apples. In the third image, “Equity: custom tools that identify and address inequality,” the person on the right has a taller ladder than the person on the left, and both are able to reach the apples. In the fourth image, “Justice: Fixing the system to offer equal access to both tools and opportunities,” the tree has been propped up by supporting boards on the left and secured with rope on the right, so it stands straight, and both people can access the apples from ladders at the same height. Illustrations by Tony Ruth.

However, even Tony Ruth’s illustration was critiqued on EDI grounds, since it focused on fixing the broken system (i.e. the tree) instead of dismantling it all together--this is a problem perhaps with using the tree as a metaphor, since we don’t want to dismantle trees--but the institutions that constrict the sharing of resources. Perhaps what we want to disrupt is the individual ownership of the tree, rather than community access. Similarly, this updated version of the equality/equity cartoon replaces the wooden fence, an obstacle to mutually enjoying the game, with a fence that all parties can see through.

In yet another update, from the Center for Story-Based Strategy, the cartoonist removes the fence all together and calls it liberation, then involves the observers in the game by dressing them in team uniforms--at last, inclusion. 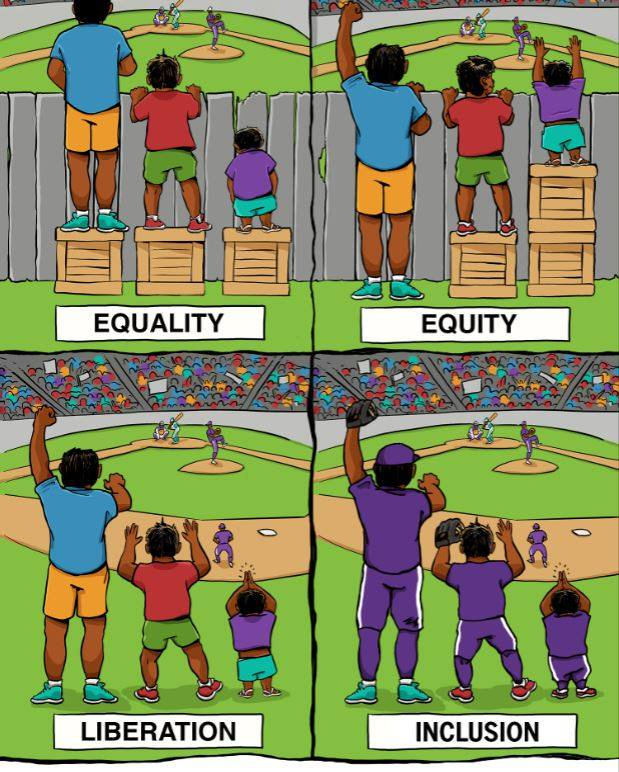 Bilias-Lolis, Evelyn, et al. “On Promoting Understanding and Equity through Compassionate Educational Practice: Toward a New Inclusion.” Psychology in the Schools, vol. 54, no. 10, Dec. 2017, pp. 1229–37.