Books are sometimes windows, offering views of worlds that may be real or imagined, familiar or strange. These windows are also sliding glass doors, and readers have only to walk through in imagination to become part of whatever world has been created and recreated by the author. When lighting conditions are just right, however, a window can also be a mirror. Literature transforms human experience and reflects it back to us, and in that reflection we can see our own lives and experiences as part of the larger human experience. Reading, then, becomes a means of self-affirmation, and readers often seek their mirrors in books. (ix)

However, because of the lack of diversity in children’s publishing, children of color may often not have the experience of reading a book that provides a mirror into their own lived experiences. In 1965, Larrick detailed the lack of diverse representation in children’s publishing in her article, “The All-White World of Children’s Books.” Current statistics show that there is still a lack of diversity in children’s literature, both in terms of the number of diverse characters that are in children’s books and the number of diverse authors who are able to publish. Dahlen and Huyck created an infographic that shows this lack of diversity, using the data compiled by the University of Wisconsin-Madison School of Education Cooperative Children’s Book Center (CCBC) that included American Indian/First Nation, Latinx, African/African American, and Asian Pacific Islander/Asian Pacific American characters. In the infographic, Dahlen and Huyck include children of color peering into broken mirrors, for even within the diverse children’s literature that exists, there can be uneven quality, stereotypical depictions, and misrepresentation in how certain groups are portrayed. The statistics also show that some white authors choose to write about racial and ethnic groups they are not a part of, which has led to questions of authenticity and ownership, with a call to allow more people of color to be able to write and publish their own stories (#ownvoices and #WeNeedDiverseBooks). The author Adichie gives a warning about the dangers of the single story. In a TED Talk that has been viewed millions of times, she states: “The single story creates stereotypes, and the problem with stereotypes is not that they are untrue, but that they are incomplete. They make one story become the only story.” 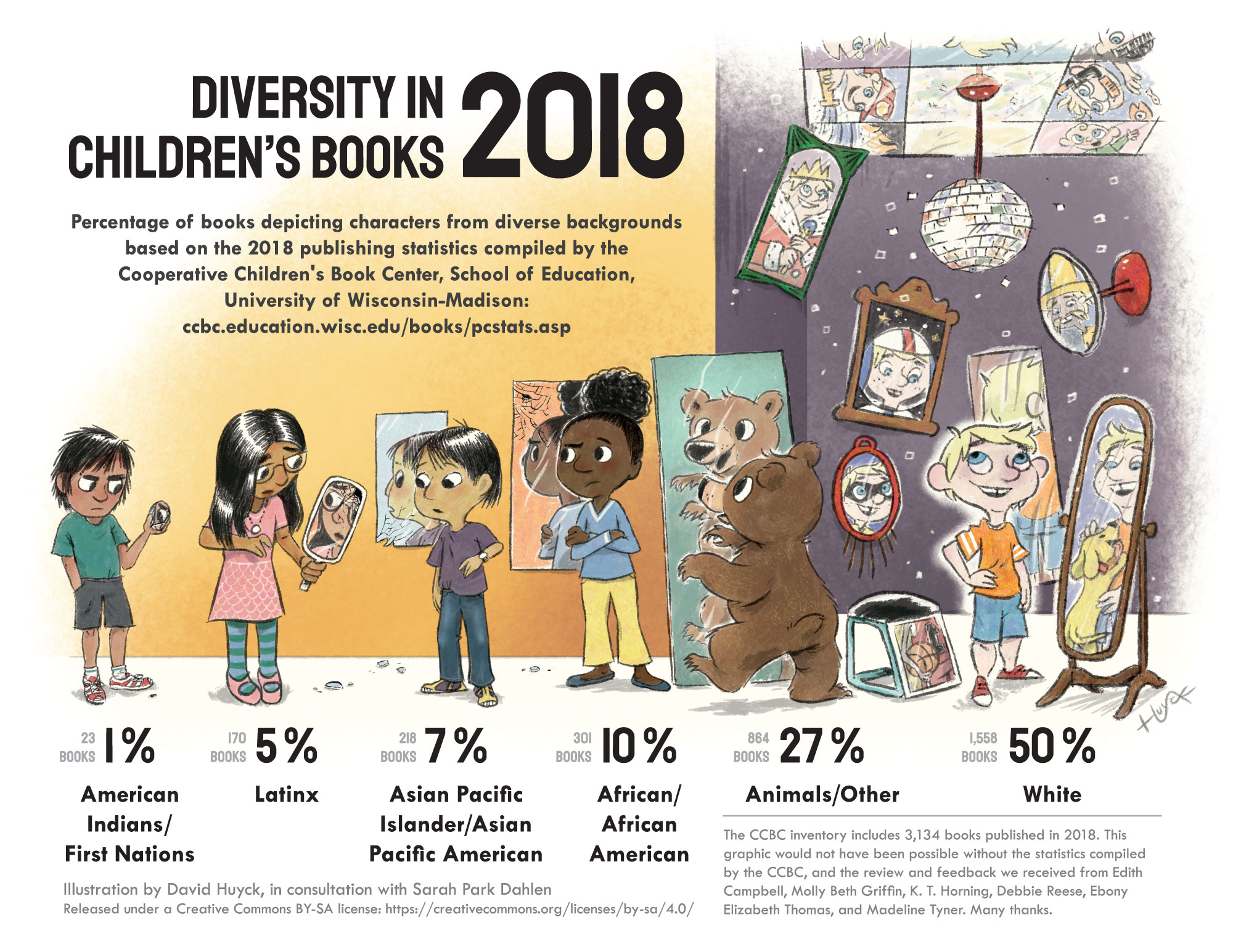 The dearth in diverse childrens’ book publishing may be in part because the publishing industry is overwhelmingly white and female. Lee and Low Books, along with Jiménez and Beckert, conducted a “Diversity Baseline Survey” in 2019 to survey publishing houses and review journals regarding the racial, gender, sexual orientation, and ability makeup of their employees. Of the respondents, 76 percent were white, 74% were cis women, 81% were straight, and 89% were non-disabled. Editorial boards, who are the gatekeepers to children’s publishing, were even whiter, at 85%.

The need for diverse children’s literature is not just for children of color. Reading stories and perspectives not one’s own can lead to greater empathy and understanding. In a world that is growing more heterogeneous, one has to but wonder what happens to white children who only read and hear stories about people who look exactly like them, and nothing else. As a way to situate this discussion of children’s literature within this larger Antiracist Praxis guide, I end with Xie’s call that “if children’s literature and the criticism of children’s literature take upon themselves to decolonize the world, they will prove the most effective postcolonial project in the long run, for the world always ultimately belongs to children” (13).

Xie, Shaobo. “Rethinking the Identity of Cultural Otherness: The Discourse of Difference as an Unfinished Project.” Voices of the Other: Children's Literature and the Postcolonial Context, edited by Roderick McGillis, Routledge, 1999, pp. 1-16.